CSS Recognized with Award for Female Diversity in Computer Science 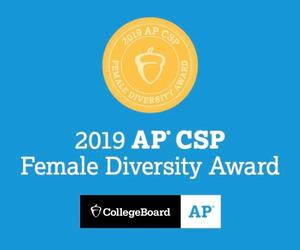 Schools receiving the AP Computer Science Female Diversity Award have achieved either a 50% or higher female representation in one or both AP computer science courses or a percentage of female computer science examinees that meets or exceeds that of the school’s female population.

Out of the 20,000 institutions that offer AP courses, 818 achieved this important result during the 2018-19 school year. This is a nearly 20% increase over the 685 schools recognized last year.

The winners represent a broad range of high schools from across the country. They include private, public, and charter schools, large and small student bodies, rural and urban populations, and specialized high schools, along with generalized programs.